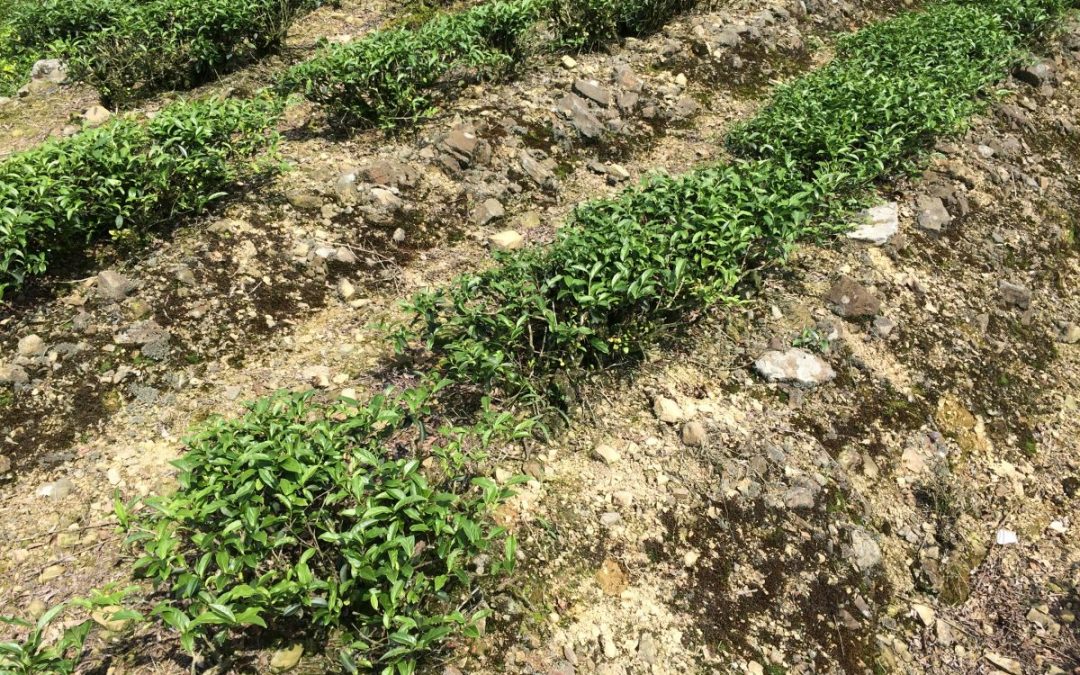 In the above picture one can see some of the effects of tea fields which have been treated with man-made pesticides and fertilizers. Tea bushes that have been placed in rows are surrounded by largely lifeless ‘soil’.

If you have an interest in high quality tea and tea culture, the questions of where and how your tea is made is probably important to you. Taken as a whole, of course your teas supply-chain can tell you much about its quality. Most important among the markers along the way begins with soil health. The history and culture of where your tea comes from probably matters to you too. Who makes your tea, and their way of living also effects the quality of tea in your cup. For instance, if they’re a heavy smoker, chances are that at least their senses of smell and taste have been damaged. This, especially in the case of Wulong production, affects the tea-maker’s ability to sense when the tea leaves have reached a level of oxidation signifying they’re ready for kill-green. A tea-maker’s need to be well tuned, as a human instrument, who’s six senses are intact, has enormous bearing on the character and class of the finished tea.

Yet, as mentioned earlier, the quality of your tea as you probably can imagine begins well before the leaves have even been picked. For starters, the microorganisms in dynamic soil have influence over just how good your tea tastes, and feels in your body. So, how can you and the tea you drink align itself with hallmarks of tea culture, such as clarity, reciprocity, and good health? If the oft-repeated idea, that ” A cup of tea is a cup of peace.”, resonates with you please consider some of the following relationships.
Farming practices the world over, especially the large and industrialized variety, are largely tainted with neurotoxins, artificial pesticides, and fertilizers. “All plants need nitrogen (N), phosphorus (P) and potassium (K) for healthy growth and productivity. These macronutrients (in addition to other macro- and micronutrients) form the basis of healthy soils.”

It’s been shown that the use of some of these man-made versions of (N) (P) (K) amplify ‘improve’ harvests by as much as one hundred percent — which prior to World War II hadn’t been seen before. In-turn these ever-increasing harvests help make it possible for over seven billion people to live on the planet. So at this point, it seems we need conventional pesticides and fertilizers to sustain growth. Is it a Faustian bargain?

In, ‘The Hydrogen Economy, by Jeremy Rifkin’, he says, “By the 1970’s the U.S. had lost more than one-third of its agricultural topsoil. The depletion and erosion, in turn have required the use of ever-increasing amounts of petrochemical fertilizers to maintain agricultural output.” That said, this is a pattern which has become endemic the world over, and has certainly been in place in the farming of tea in Taiwan since the 1970’s if not earlier. At this point it’s well known that due to demand for Taiwanese tea, especially high mountain tea from, to name just a few places, ‘Ali Shan, Yu Shan, and Dong Ding, for the sake of “convenient” farming, and to meet customer demand, many farmers turned to the aforementioned artificial chemical pesticides and fertilizers, at the expense of the land, and the water table. Unwell and dead topsoil equals unhealthy and lifeless tea —not to mention sick bodies of water and people who drink from them.

Additionally, it is interesting to consider the reasons why relationships between weapons and fertilizer manufacturers exist at all. Is it just another case of our ability to develop technologies which outpace our maturity as a species? Regardless, when it comes to the question of sustainability, one finds themselves preaching to the choir at three pm on Sunday. So with respect to what’s in your cup, is it a white elephant? From, Gro Intelligence, ‘Like Day and Nitrogen: War, Peace, and the Dawn of Fertilizers’ 23 June 2016:

Of course, it is difficult to predict the trajectory that the effects of technological innovations will have on global society. What is clear, however, is that rather than representing distinct and mutually exclusive chapters of human history, agriculture and warfare are often engendered by the same innovative and disruptive technological forces. BASF—the first company to manufacture ammonia using the Haber process and now one of the largest fertilizer producers in the world—offers a prime example of the link between military and agricultural innovation. In other words, while our military innovations have fueled agricultural productivity and prosperity on previously unseen levels, it may be our agricultural innovations that ultimately divert us from a potential future of war.

Excessive nitrogen similarly destroys the atmosphere. Nitrous oxide, a product of nitrogen fertilizers, is 300 times more effective at trapping heat than carbon dioxide and has contributed to the resurgence of acid rain in developed countries such as the United States. These globalized effects of nitrogen pollution offer no easy solution, especially considering the essential role that artificial fertilizers play in feeding the population. Most searingly, recent research indicates that synthetic nitrogen destroys the soil over the long-term by decreasing its ability to retain water and increasing its dependency on artificial nitrogen sources.

So, is that cup of tea really a cup of peace? Recognizing how farming methods came to be as they currently are is important when trying to unravel the reasons why it can be very difficult to find tea born of environmentally friendly, truly organic natural farming methods. If you can make the trip, come to origin and visit a few of your favorite tea growing regions. Getting to the know these places in springtime is an especially good idea, and not only because of the freshly made tea. By doing so you’ll have taken in their atmosphere and you’ll be able to identify healthy tea gardens and unhealthy yet picture-perfect ones. Well after you’ve returned home, if you’ve brought tea with you, you’ll be reminded of those places by way of it. The scent of orchids and fresh wild grasses in the morning, and at first perhaps without even knowing it, your senses will have likely improved too.